Historians at Podgorica Plenum: Marriage between history and politics is always a bad match

The second day of the Podgorica Plenum: “Quo vadis, Balkans? “ organized by Regional Academy for Democratic Development, Center for Civic Education and Friedrich Ebert Foundation, started with the panel of historians, where Ivo Goldstein from Croatia, Milivoj Beslin from Serbia, Husnija Kamberovic from Bosnia and Herzegovina, Dubravka Stojanovic from Serbia and Adnan Prekić from Montenegro gave their views on the problem of radicalization and fascism of societies in the Western Balkans.

Historian Ivo Goldstein said that the Second World War was crucial for our understanding of the present. He emphasized that in the time of socialist Yugoslavia, a culture of remembrance was created, interwoven with a strategy of creating brotherhood and unity and a clear definition of who was on the right side and who was on the wrong side in World War II. He concluded that the former Yugoslavia provided an honest and accurate answer to that question. With all the knowledge about the crimes that were committed then, the fact remains that the partisans were the only ones on the right side. He added that in the 1980s and 1990s, both in Croatia and in Serbia, these things began to relativize. Historical revisionism entered the scene in a grand style. Goldstein recalled the first election campaign in Croatia when Franjo Tudjman declared the fascist NDH an expression of the Croatian people’s desire for their own state. He stated three reasons for Croatian revisionism. First, imposed silence about sensitive topics from the Second World War, political goals of revisionists who are extremely right-wing and because of which we can call that revisionism Ustashaization or Ustasha–nostalgia, and then the response to Serbian nationalism generated by the situation in Kosovo and dissatisfaction with the 1974 Constitution. Goldstein added that revisionists have been operating in Croatia for more than thirty years and are constantly and very actively spreading lies, the amount of which is quite difficult to deal with. He concluded that the marriage of politics and historiography is always a bad match.

Dr. Milivoj Bešlin said that history never belongs entirely to the past and that it is impossible to study history without a modern context. He warned of the constant needs of political structures to legitimize themselves by abusing history. He emphasized that the problem in the Balkans is that national historiographies have never separated from nationalist ideologies, and that is why historians in this area are fighting battles that their colleagues in Europe won in the 20th century. All right-wing movements are based on bribery, which means abuse, fabrication and falsification of facts. He assessed that the dominant nationalism in our region is Serbian nationalism, which, like other nationalisms in our region, abuses history and myths, that it does not recognize polyvalence of identity and that it depicts the totalitarian character of nationalisms in our region. He also spoke about the role of the Serbian Orthodox Church as the initiator of Serbian nationalism today, but also about the basis on which the Serbian world is being built, as a kind of replica of the Russian world. Beslin assessed that it could be concluded that Serbia has overcome the phase of historical revisionism and entered the phase of historical revanchism, which in a violent way, by destabilizing the region, is trying to change relations in the region and endanger other countries. 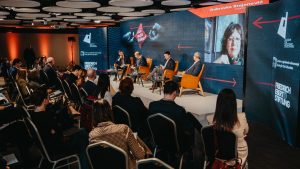 Dubravka Stojanović said that history is a science about the present, and not about the past, and emphasized that a distinction should be made between revision of history and revisionism, which implies conscious, malicious ideological and targeted manipulation of historical facts and abuse of the past. This is a big problem when it comes to science, but a much bigger problem when it turns into history teaching and when we talk about right-wing movements and young people who are mostly right-wing oriented, we should keep in mind that one of the reasons is history teaching. Professor Stojanović said that the goal of the changes in the history textbooks of the 1990s was to put the war in the context of the present and to justify it. During 2000s, there was a radical change in the position and perception of historical role of partisans and Chetniks in Serbia, and that is the interpretation of the Second World War that has remained until today. The last attack on textbooks in Serbia took place last year, with calls from officials to abolish the possibility of choosing between various textbooks and for the state to write textbooks that will “tell the truth”. She assessed that in all countries of the region, when it comes to school history, there has been a drastic deterioration through heroic narrative, glorification of war and self-victimization. Professor Stojanović estimated that nationalists have created states without a future since the 1990s and during the wars, and created states that offer eternity, but without hope and without a vision of the future.

Professor Husnija Kamberović analyzed the dramatic situation in Bosnia and Herzegovina and identified different motives and dynamics in radicalization. In political terms, if we focus on the post-war period, he identified several different channels for implementation of extremism, the most important and potentially the most dangerous being institutional. He emphasized that the problem is that there is a large number of different truths in Bosnia and Herzegovina, and that talking about national historiographies means giving them the importance of scientific historiography, which certainly cannot be the case. He added that the nationalist interpretation of the past is trying to create a better image of the past in order to gain legitimacy through such an image. He assessed that the way to fight against these phenomena can be cooperation between historians, both at the regional and national level, and that a joint response must be provided.