The Podgorica Plenum “Quo vadis, Balkans?” was held from February 10 to February 11 and was organized by Regional Academy for Democratic Developmentm Center for Civic Education and the Friedrich Ebert Foundation, with more than thirty participants from across the region discussing ways to jointly fight nationalism, chauvinism and extremism in our societies and various modalities to counter fascisation of the countries throughout the region.

Over the course of two days, the issue will be elaborated from different angles, and some of the participants include: mayors of Podgorica and Sarajevo, Ivan Vukovic and Benjamina Karic, former Croatian President Stjepan Mesic, longtime member of the German Parliament Josip Juratovic, historian Ivo Goldstein , historian Dubravka Stojanović, former President of the Parliament of Montenegro Ranko Krivokapić, Member of the Parliament of Bosnia and Herzegovina Sasa Magazinović, former Deputy Prime Minister and Minister of European and Foreign Affairs of Croatia Vesna Pusić, journalist Vesna Mališić from Serbia, writer Andrej Nikolaidis from Montenegro, as well as other prominent fighters for peace, reconciliation, respect for human rights and democratization of the region.

At the opening of the meeting, the President of the Executive Board of the Regional Academy for Democratic Development Balsa Bozovic said that the glorification of war crimes and politics of the 1990s again took the lead in public speech and that this narrative goes hand in hand with attempts to change history and adjust it to the current political needs of corrupt political elites. He said that this is not a problem exclusively of Serbia, but also of other countries in the region, and that we are all part of one cultural space in which such phenomena are mutually conditioned. Bozovic emphasized that the fact that in Serbia there is no institutional protection for those who are fighting for the promotion of just, peaceful and modern Serbia gives special reasons for concern, just as there are no sanctions for those who spread national hatred, glorify war crimes and even call for violence. He assessed that in the entire region we are witnessing the cessation of dealing with the past, that without that there can be no reconciliation, and that without reconciliation there will be no sustainable and lasting peace in the Balkans, and that this suits traditional conservative political elites which benefit and profit from this state of art. 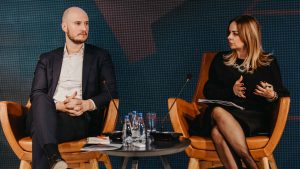 The executive director of the Center for Civic Education, Daliborka Uljarevic, said that only a few years ago in Montenegro, it was almost impossible to assume that we will discuss topics such as religious and ethnic conflicts, and not such as progress in European integration. She assessed that such problems were imported to Montenegro from neighboring countries, and that it turned out that the structures in power were not able to resist these influences. Daliborka Uljarevic emphasized the importance of cooperation between the non-governmental sector, academic community, media, value-determined and uncompromising political parties, and that this cooperation should be based on common values, and not on daily political needs.

Maja Raičević, executive director of the Center for Women’s Rights from Montenegro, said that education is crucial when it comes to the fight for human rights, and that it has to go in pair with the responsibility of those who are in decision-making positions, who often, with their rhetoric, lack of reaction or selective reaction, encourage hate climate and contribute to the normalization of hate speech. She assessed that all the countries of the region are at the very beginning of building institutions to establish responsibility for these situations and that it is necessary for all political actors and all institutions to be clearly determined and resolute in every case of extremism, chauvinism and spreading hatred.

Demush Shasha, director of the EPIKEU Institute from Kosovo, assessed that nationalism and right-wing extremism are the main obstacles to the European integration of all Western Balkan countries, and to the overall development of societies in these countries. He pointed out that it seems that all our countries are trapped in their past, doomed to a constant repetition of history, with the same actors, the same disastrous policies from the war years, and that this hinders their progress.

Kalinka Gaber, advisor to the Government of North Macedonia and one of the founders of the ADD, stated that ignorance and poor education always stand behind speech and hatred, but that the example of North Macedonia can clearly shows how change in the political context can affect the public discourse and the use of hate speech, both through a change in the narratives of those responsible and through the reaction of institutions and competent bodies. She assessed that the Europeanization of the society is not a question of membership in the European Union, but above all the creation of better living conditions for the citizens of our countries.