Novi Sad event consisted of two panels and was highly influenced by the Russian aggression against Ukraine which happened days before the conference. Journalists who spoke at the panel I used the way in which media reported about the war in Ukraine to depict overall role of the media in political processes in Serbia. 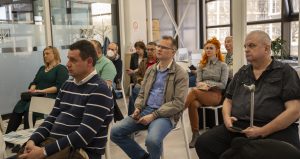 At panel I, there were three speakers – Dinko Gruhonjic, professor of journalism at the University of Novi Sad, Darko Sper, Chairman of the Trade Union of culture, art and media and Denis Kolundzija, journalist and winner of numerous awards in the field of civic oversight of the work of the government. They spoke about the role of the media in the country’s democratization process. They also gave their position about the control of the work of institutions, timely, objective and truthful information of citizens and the process of building inclusive institutions at all levels of government, and they also referred to the manner in which media in Serbia report on the war in Ukraine.

Denis Kolundzija pointed out that when reporting on the conflict in Ukraine, conflicting messages are being sent to the public, and that even the European Union is being sent messages that, although we are trying to lead a balanced policy, our heart very clearly belongs to one of the sides. He emphasized that completely contradictory information is being distributed to citizens, with the explanation that Serbia will not choose sides in the conflict, and that the fact that the authorities are standing behind these information is particularly problematic. Kolundžija warned that meaningful, investigative and critical journalism remains extraordinary rare, and that in situations like this one it is very easy to manipulate citizens’ fears. He emphasized that it is not enough just to list information, often contradictory, because then citizens are only overwhelmed with data and information, while in fact they are very ill-informed. He stated that the role of media is also to process information, analyze data, follow-up on the stories and hold authorities and institutions accountable to citizens. 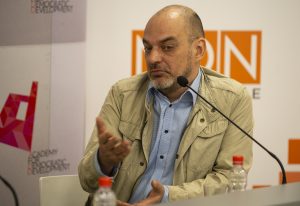 Darko Sper warned that there are not many serious and meaningful articles about the conflict in Ukraine, that every information is presented with disclaimers, that there is lot of unconfirmed and unverified information, fake news and propaganda and that there is very little awareness of how dangerous processes we are witnessing are. He emphasized that a month after the start of the war, the situation is increasingly dangerous and that any voices siding with Russia or expressing support to the war have to be condemned. Sper assessed that the situation now resembles the situation in Serbia in the 1990s. He warned that the entire media scene is tabloidized and that both the government and the opposition are happy to give statements, interviews and cooperate with tabloids, depending on whether they are pro-government or pro-opposition oriented. Speer noted that many political parties are trying to benefit from the situation in Ukraine and using it in the electoral campaign trying to show support for Russia. He said that currently one of the main problems is the lack of an organized editorial audience and that the fact that only 1% of information about European integration is in the media is of particular concern. He also warned that the situation in Ukraine could spill over into the Western Balkans first. Speaking about the role of the media in the electoral campaign, Speer stated that there is no culture of civic dialogue in Serbia, and that the fact that many journalists and analysts who pretended to be independent found themselves on electoral lists and campaigns of different parties also indicates how deep the crisis is. He said that there is no realistic, truthful and non-biast information for voters and citizens, and that they have nowhere to hear the views of political parties on key topics, such as the European Union, war crimes, facing the past, and so on.

Dinko Gruhonjic said that Serbia is Putin’s only ally in the Western Hemisphere. He said that the cruicial question, the one that depicts overall situation in media, is why the media do not warn the public about the dangers that are arising from this position of Serbia, just as they ignore the dangers that come from Greater Serbian nationalism, the consequences of which are currently felt most in Montenegro. Gruhonjić wondered why the media, even those that are considered to be liberal, analytical and civic-oriented, do not deal with these topics at all, even though they are crucial for our society. He stated that the root cause of the downfall of journalism in Serbia was in 2006 during the constitutional campaign, when the so-called independent media apparently joined the campaign to promote the referendum, despite numerous warnings that they have to stay independent and must not engage in political campaigns.