Speakers at the Panel II were H.E. Oleksandar Aleksandrovich, Ambassador of Ukraine to Serbia, Bohdan Ferens, President of the SD Platform from Ukraine, who participated online directly from Ukraine, President of the Helsinki Committee for Human Rights Sonja Biserko, prof. dr. Milivoj Bešlin, historian, Aleksandar Popov, president of the Center for Regionalism and one of the founders of the Igman initiative and Balša Božović, Chair of the Executive Board of the Regional Academy for Democratic Development.  Activist and President of the SD Platform from Ukraine Bohdan Ferens joined directly from the field from Ukraine and emphasized that the situation in Ukraine is extremely difficult both in humanitarian and security terms, and that this war is not only war between Russia and Ukraine, but also a struggle between totalitarianism and the values ​​of freedom and human rights. He warned that the Russian side is trying to push part of the Ukrainians into Russia and that the citizens of Ukraine are very grateful for all the help that arrives in Ukraine, primarily from neighboring countries, such as Poland and Hungary, but also Germany, whose position was very delicate from the beginning of the conflict. Ferens emphasized that one of Russia’s basic weapons is propaganda, and that the fight against propaganda and the fight to hear the truth about the real state of affairs are extremely important.Balša Božović, Chair of the Executive Board of the Regional Academy for Democratic Development, said that solidarity and joint activism are important in such difficult times and that it is crucial to explain to citizens what is propaganda and what is the truth. H.E. Oleksandr Aleksandrovich said that Ukraine will never give up on its main goal, which is the complete withdrawal of Russian forces from the territory of Ukraine. He emphasized that every help is valuable, as well as the organized admission of refugees in Serbia, and expressed his satisfaction with the fact that the Government of Serbia organized this admission. He warned that Russia will use every opportunity to destabilize relations in the Western Balkans region and then offer help in solving the crises it deliberately caused itself. He said that the history of Russian-Serbian relations is similar to the history of Russian-Ukrainian relations, that the success of Russian attempts will depend on the power of the countries in the region and the ability to resist Russian influence. The ambassador said that sometimes the interests of the governments of countries in the region coincide with Russian interests and that the danger lies in that. He said that it was expected that before the attack on Ukraine, Russia would create small fires everywhere – in the Balkans, in Syria, Kazakhstan – to distract the attention of the international community. The ambassador said that he has been warning for years that violent groups that the government thinks it controls can very easily get out of control and start receiving orders from various structures from other countries. He expressed his belief that Ukraine will prevail. 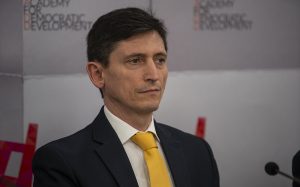 Historian Prof. Dr. Milivoj Beslin gave the historical context of Russia’s aggression against Ukraine and stated that Ukraine did not pose any danger to Russia and drew a parallel with the attack on Czechoslovakia in 1968. He interpreted Russia’s attack on Ukraine as an attack on the idea that democracy and liberalism are possible in a large Orthodox Slavic country. He assessed that Ukraine proved with both Maidan events that it can democratize and build a civil and plural society, that it can have free elections and media, and that the only danger Kremlin could see laid in that fact. He assessed that the ideological basis of the attack on Ukraine were two speeches – one by Vladimir Putin, in which he said that Ukraine does not exist as a nation and state, and the other by Sergey Lavrov, when he said that artificial creations should not exist. Beslin drew a parallel with the ideology of Greater Serbian nationalism and recognized similarities in the attitude towards neighboring states whose existence Serbian nationalism also calls into question. 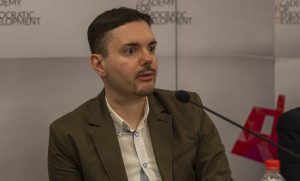 The director of the Center for Regionalism, Aleksandar Popov, assessed that we are witnessing Russia’s long-term malignant influence in this area and continuous attempts to destabilize the situation in the region, citing Montenegro as currently the biggest victim of that pernicious Russian influence. He said that more than a quarter of a century was missed to make Bosnia and Herzegovina a functional state and a service for citizens, and that the fact that there was a need to strengthen EULEX’s forces is worrying. When it comes to Kosovo, Popov warned about the events of a few days ago and the crisis that arose around the organization of elections in Kosovo and said that it is a dangerous game in which all actors have their own interests, and that the definitive victims will be the Serbs in Kosovo. Popov said that in the western part of the region there is unequivocal support for Ukraine and condemnation of Russia’s attack on Ukraine, but that, as we move eastward, the situation is becoming more and more worrying. Speaking about Serbia, Popov said that attempts to “sit on two chairs” can be extremely dangerous. He estimated that many things in the region will change depending on the position of Serbia. He assessed that the Open Balkans and the “Serbian world” do not go together and that precisely those contradictory messages coming from Serbia prevent the stabilization of the region. 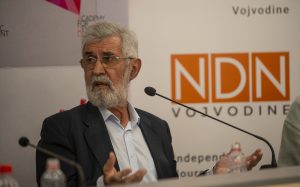 The president of the Helsinki Committee for Human Rights Sonja Biserko said that the preparation of the aggression against Ukraine began with Putin’s coming to power, that it was not a decision that was made at the moment, and that Putin had been announcing and hinting for years that exactly this would happen. She drew parallels between the “Russian world” and the “Serbian world” and warned that the “Russian world” has turned from a project to protect the Russian people and the Russian language into an attempt by Russia to expand its influence and territory. She agreed that there was no reason to suggest that Ukraine could pose any threat to Russia and that the only surprise for Putin was that Ukraine showed incredible strength and courage to stand up to such a military power as Russia. She warned that Putin has managed to corrupt many leaders in the West and to finance left and right movements in various Western democracies. The fact that the West will not intervene and only helps despite Russia threatening nuclear weapons, and that this reaction largely depends on whether Russia will try to implement other activities in other areas, primarily in the Western Balkans region. Biserko assessed that Serbia is facing a whole series of questions and that it is in a situation where it will soon have to make a decision. She said that in Serbia it was Russia that launched an anti-NATO campaign through its media and that it succeeded in establishing a presence in all areas of public life and political processes. She concluded that a big mistake was made in Montenegro when the riots were not immediately recognized as a danger and an attempt at destabilization organized by Moscow and the Russian services. 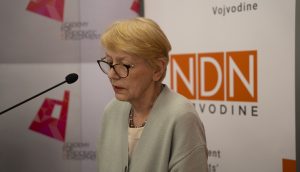 Serrbia 2030: Parliamentary representation of Albanian national minority must not be denied Serbia 2030: More information than ever, but more disinformation as well