Closing panel of Podgorica Plenum: They are teaching people to hate, although they know that they are wrong

Former President of Croatia Stjepan Mesić said that when he was finishing his mandate, it was impossible to think that in 2022 we would discuss ethnic tensions in the region and the rise of nationalism. He stated that ethnic tensions and nationalism not only resisted, but also turned into dominant ideologies and dominant discourse, for which there are several reasons. One of them lies in the fact that the political elites in the newly formed states realized that they would most easily mobilize voters, keep themselves alive, and often unhindered criminal activities, through the production of enemies. He paid tribute to all those who worked and continue to work for reconciliation, respect for all victims and normalization of relations in the region and strongly criticized those who present themselves as defenders of the nation and national identity while manipulating and creating an atmosphere of constant growing fear and teaching the public that everyone who is different should be hated. He cited the shameless abuse of democracy and freedom of public speech as the second cause of today’s situation, warning that democracy must never become anarchy and allow everyone to do whatever they want, just as freedom of expression must include responsibility for every word spoken. President Mesic emphasized that freedom must never be at the expense of someone else’s freedom, that freedom of expression must be guaranteed but we must never abuse it to spread fear and hatred towards the other and the different. He warned of the danger of growing voices advocating the free spread of hatred under the auspices of the fight against the “culture of prohibition”, which in fact are trying to enable themselves to act unhindered and expressed concern that there is no organized force in society which would oppose them. He reminded that hatred was fabricated to make it easier to mobilize people for war and that it just served as a basis for war and that the only wars in which our nations truly clashed were the wars in which Yugoslavia disintegrated. Mesic warned that in our region, nationalism does not mean loving one’s own, but hating others. He believes that our societies urgently need a fundamental and radical reform, re-establishing the order of social values, redefining the values ​​and rules on which societies are based, correcting completely wrong values, a turn in social development that can almost be called a revolution. President Mesic said that he believes that, if this does not happen, we will face a radical right-wing counter-revolution whose devastating consequences we cannot even imagine. 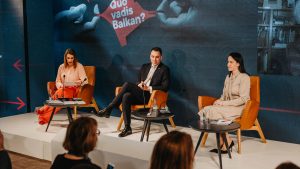 The Mayor of Podgorica, Ivan Vukovic, said that there are new generations in the region whose worldview is significantly more conservative, who were educated and brought up in the spirit of emphasized religiosity, whose perspective is, paradoxically, narrower than those of those who grew up in a country that could not be considered democratic. He added that we are in a situation where the European perspective is increasingly uncertain, the economic situation is increasingly difficult, and global priorities are moving further and further away from the Balkans, and that it is extremely suitable ground for strengthening retrograde ideas. He said that there is a line on the political scene that separates those who believe that diversity is a treasure and that we are all equal, and those who believe that through multiculturalism we separate ourselves from our identity, our roots and annul what we are and that that is the essence of the political struggle that is being waged today in all post-Yugoslav societies. Vukovic assessed that a minimum of social consensus is necessary for the construction of a new system of values, which, in turn, it is necessary to set an example in which political elites must play a key role. He concluded by saying that in Montenegro some things must remain outside the domain of daily politics because that is the only way to preserve social forces that must work in favor of preserving those ideas, regardless of who is in power at the moment.

The Mayor of Sarajevo, Benjamina Karić, emphasized that she was concerned that the values ​​instilled in many of us in our families, such as anti-fascism, would not be possible to pass on to young people and that they would not adopt them. She said that those topics are important in all times and are not just World War II-related topics. She assessed that we are wrong when we talk about the return of the ideas of social democracy and anti-fascism, and that we should talk about their intensification or empowerment, rather than disappearance, since these are universal ideas that have nothing to do with religion, nation or political conflicts. She emphasized that civil society should be a corrective and a partner in everything that politicians do.

Daniel Serwer, one of the most prominent international experts on the situation in the Balkans, said that many people in the Western Balkans are saying that they are disappointed with the situation over the past twenty years and that not much has changed since the war. He assessed that the situation in the Balkans is extremely difficult, that all countries in the Balkans are economically dependent on aid from the European Union, which, in turn, is facing other crises and has other priorities, which has slowed down the process of European integration. At the same time, Moscow and Beijing are increasingly present in the region, each in its own way and with its own goals, just like Turkey, without any of these powers sharing the values ​​of the liberal democracy system on which the European Union and the United States are based. He stated that the ethnic populism that is flourishing in the Balkans is a fertile ground for the actions of Russia, China and Turkey, and that one of the ways to oppose these influences in  Western Balkans is empowering progressive politicians who must act in cooperation with civil society. Speaking about the situation in Montenegro, Professor Serwer praised the peaceful change of government in this country and said that it is necessary to closely monitor how Montenegro will emerge from the current crisis.

Historians at Podgorica Plenum: Marriage between history and politics is always a bad match Bozovic: It is crucial for Serbia to align with EU regarding Ukraine